This is an Opinion site. Unlike Leftists, I back up my opinions with verified facts and the consistent application of personal morals. I do not do "current events" as I like to wait until facts come out and I have to grok on it until fullness is achieved.

This is a one-man operation that I get to after my day job and family. Currently posting only sporadically due to the time it takes me to make a post vs. the demands on my non-computer life. All comments are approved before posting to prevent spam. Coherent comments of differing opinions are welcome.

Third best day of my life

Just to give you a scale for this, the best day of my life was when my Beautiful Blushing Bride said, "I Do." The second best day was wen my son was born.

So, I got permanently banned from Facebook two days ago. I was responding to a meme in a group that the purpose of was to push the limits of propriety and bad taste. I actually used a meme that I had posted on my personal feed and FB didn't bat an eye. My response was the straw that broke the camel's back and the group was shut down.

To be truthful, I could appeal, but I've wrote about the difference between a platform or a publisher before, and I'm tired of expressing myself on a publisher without getting paid. My ban isn't permanent until 1/14/22. However, in order to return I must first prostate myself before their nearly omnipotent Philosopher-Kings and beg for their favor to let me return to that reached hive of scum and villainy. Let me think about it, no. Also, this ban happened while I was appealing the group ban. Here's what I sent to their "Oversight Board." 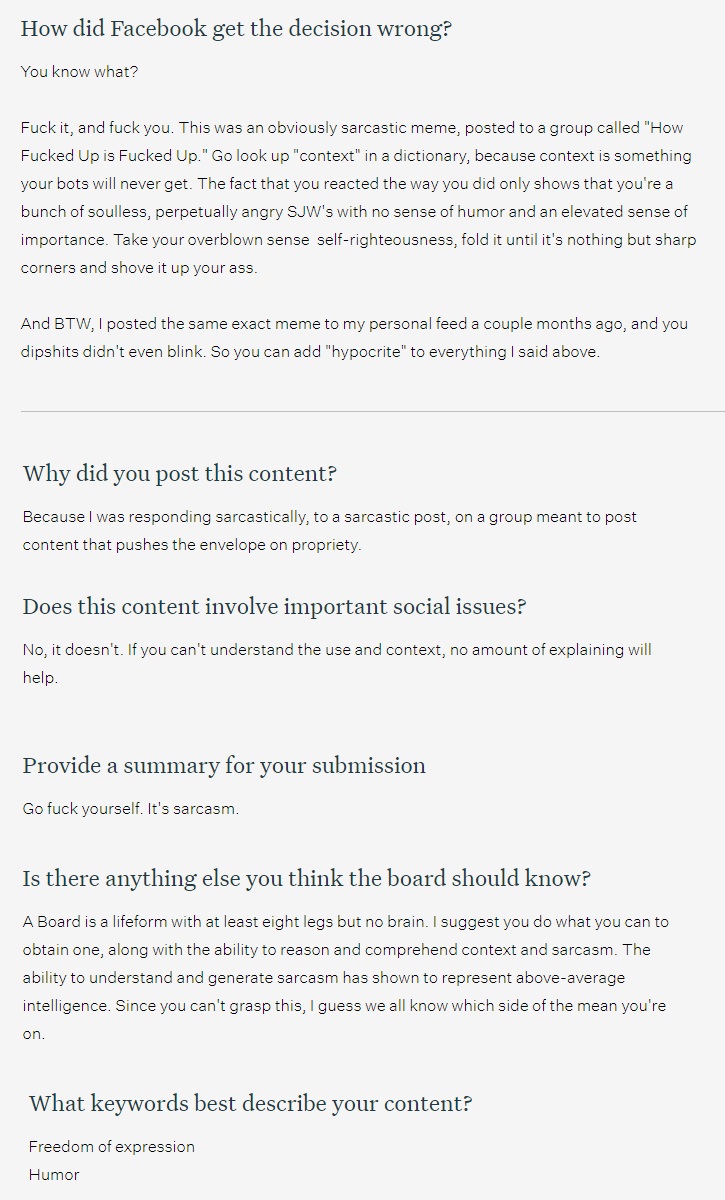 So, I will now recover the several hours a week I previously spent discussing and arguing various points on FB. I'm sure I'll live, I've lived for several decades before FB came around without social media. I haven't forgotten.

Give me an earful. I may not respond, but I read everything.

If you want to be successful, make sure you've defined success correctly.

All material this website © 2003-2022 The Conservative Zone. Any pictures,
descriptions and opinions unless otherwise noted are those of the site's owner.
Permission to quote or copy sections is allowed if attribution is given and linked
back to this website. Violators will get a visit from Vyto from Chicago.